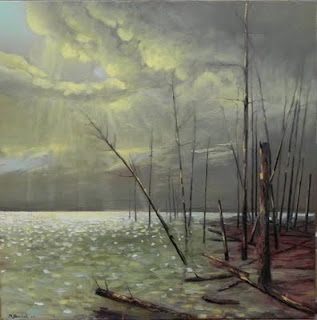 I was doing some snooping around in my workshop and started pulling mirror boxes out to see what was inside of them.  In one of them I discovered this painting that I had titled "The Aftermath".  It is a statement about the devastation caused by Manitoba Hydro in Northern Manitoba, particularly around Easterville.  It turns out that there are some far reaching ramifications to flooding boreal forests, like permanently displacing people who were perfectly happy living where they were prior to the flood.  I thought the picture was also interesting in light of all the flooding happening all over Canada right now.
at May 10, 2011

Hauntingly beautiful. I find myself admiring the painting, even 'resting' in its calm, then sadly become aware of the trees that once were.

Thank you Lorna. I have strong feelings about Corporations destroying peoples lives and habitat. On a lighter note I enjoyed your article on Repin, a favorite Russian artist.