I am just recently back from Honduras, where I was asked to paint a mural on the wall of a Mission School that a group of friends built a number of years ago. I have been there before, six years ago I painted my first mural of a jungle theme.  Anyways, after being there for a week the time came for registration of the children, K to 6. The morning dawned bright and hot and all kinds of Honduran's showed up at the gates of the compound to register their children.  I watched the scene from the second story of the school and was struck by the joyous atmosphere of all the people below, it was quite an emotional time for everyone.  I determined that when I got home I would attempt to capture that feeling I experienced, one of happiness, expectation, togetherness and also the vibrancy of the day.  So, the painting evolved into something that became a lot of fun to do, not necessarily being to concerned about representing the literalness of everything but more of the emotional aspect.
at March 19, 2016 No comments: Links to this post

It was a particularly nice morning to paint outdoors so I packed my paint box and headed out to look for a nice place to sit and enjoy the springlike weather. Good thing I did because the weather changed the next day and we are back into winter for awhile. 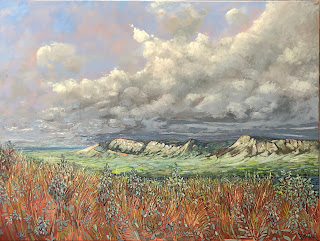