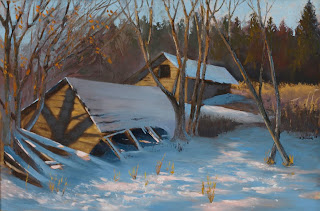 Finally, February is over! Walking out side on a sunny day you can feel the warmth of the sun on your cheek, even if it is minus 37 with the windchill. Despite the cold I still manage and look for the beauty all around me. I love to go for walks with my two shelties (Piper and Oreo), and see what there is to see out there. This painting was inspired by walk I took on a similar day near my good friend Jan Layh's bed and breakfast establishment at Langenburg, Saskatchewan. I understand that the owner demolished what was left of the place and hauled it all away!
at February 28, 2009 No comments: 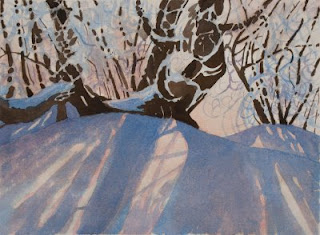 I'm not one to complain, but the sun hasn't shown its bright, cheerful face for some time now. As a consequence of that I decided yesterday to paint a watercolour celebrating its effect on hoar frost laden tree branches and deep blue shadows. It was a fun exercise and I am resolved to paint more in that vein.
at February 25, 2009 1 comment: 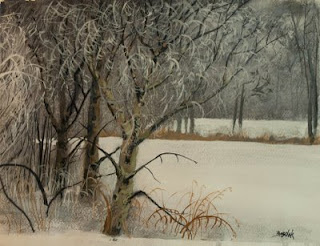 Its starting to seem that this winter is taking a long time to be over with. The weather has been up and down like a yo-yo, it seems like the sun hasn't been out to much and to make things even more depressing, our world wide economy is going south big time. Actually, if you can get over all of that and simply take a walk outside with your eyes wide open it is easy to forget all the seemingly bad stuff. Lately we have had a lot of hoar frost in the mornings and that can transform the seeminly mundane landscape into a winter wonderland, sun or not. This is a watercolour painting of a scene within walking distance of my apartment where I take my dogs for a walk in the morning. It is amazing how there can be the most beautiful colour and light even on the grayest of days. Something to be learnt here.
at February 24, 2009 2 comments: 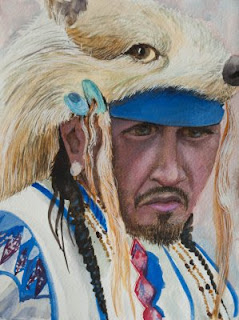 The annual Trappers Festival has come and gone in The Pas, Manitoba. It is the longest running winter festival in Manitoba and one of the oldest in Western Canada. It's claim to fame is the dog races, mushers come from all across North America to vie for first prize. Back in the early 1900's the dogs would run from The Pas to south of Flin Flon and back but they no longer do that. I sometimes wonder if they shouldn't reinstate that practice as a number of other Festivals are doing it now and it is becoming quite popular. Along with the races there is King and Queen Trapper events, the Fur Queen competition, musical and drama events and many other fun and exciting events. The Festival attracts people from all over the world that are interested in the older traditional ways of life. The aboriginal peoples participate in a big way, with dancing, arts and crafts and musical events, as well as winning many of the events that are hosted. I have painted a picture of an aboriginal fellow who is a wonderful dancer, he performed at the Friendship Center along with some traditional drummers.
at February 24, 2009 No comments: 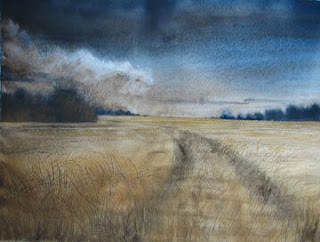 I painted this watercolour not long after I moved from The Pas, Mb. to Watrous, Sk. It epitomizes the grandness and beauty of the prarie landscape, and is so typical of Saskatchewan, Alberta and parts of Manitoba. You can see an approaching storm from a long way off, the skies are totally amazing.
at February 09, 2009 No comments: 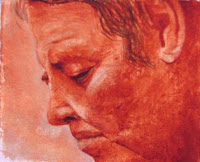 I haven't been very regular with my posting so I am playing somewhat of a catch up game here, hence the posts that have the same date. This is a small watercolour of George, an aboriginal artist I met at an art show last February in The Pas, Manitoba. He lives on the Poundmaker reserve in southern Manitoba and is an awesome visual artist as well as a musician. He was playing his guitar when I conceived this pose. I don't think he has had an easy life but you would never know it by talking and listening to him. I admire him and wish him well.
at February 09, 2009 No comments:

Today I couldn't resist going outside and painting a small picture. I decided to go to a little park called Wellington Park, at Manitou Beach, Saskatchewan. It is a little gem of a place and has a small creek that has managed to stay open all winter, despite the awfully cold temperatures we have been enduring. By cold I mean -30 Celcius and below. Today it was -4 Celcius and very foggy so it was definitely warm enough to paint with oils and a painting knife. I set myself up by the creek and enjoyed the sound of the water as I happily painted, serenaded by the bird songs of chickadees, magpies and some crazy robins that have over wintered here. My dogs curled up in the snow beside me and conserved their energy for playtime later on.
at February 09, 2009 No comments: 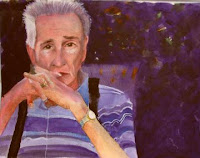 I would like to share this watercolour painting I have done of my father. It obviously was a labour of love and I have captured a particular essence that my Dad exhibits. He is actually a good model and I wish I had thought of painting him sooner. He has suffered a couple of minor strokes and has other health issues that he is struggling with but he continues to exhibit humour and generosity. I had this painting propped up on my living room couch to view it when one of my Shelty dogs noticed it and immediately became quite agitated. She began to growl and tensed up her in a manner that suggested fight or flight. I had quite a laugh over that and was flattered that she recognized Dad.
at February 09, 2009 No comments: 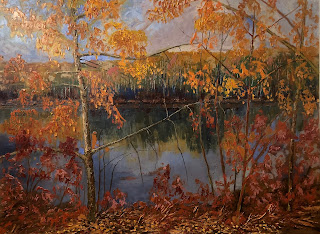