Something outside my window 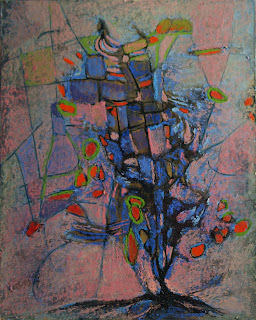 Titling paintings can be an interesting exercise sometimes and this painting was no exception.  I gain alot of inspiration from simply looking out my studio window and what I see outside these days is Autumn happening.  So, I saw something outside my window.  I leave the rest to you.
at September 26, 2011 No comments: Links to this post

The other evening my wife suggested I vacate the house and go to my studio (some call it the Man Room) as she was having a friend over to do Reflexology.  So, like the dutiful husband that I am, I retired to my room and proceeded to do the pastel you see above.  (It doesn't take much arm bending to get me into my sanctuary)  I prepared the support for this piece using quite a bit of marble dust and a dark toned acrylic paint, using a ragged old brush that some might throw in the garbage. You can judge the scale of this natural wonder by comparing the size of the trees below to the natural bridge above. The impetus for the picture came from reminiscing about last Falls road trip to the beautiful state of Utah, in particular the southern half where we encountered the most amazing vistas.  The sandstone arches are totally mind boggling and inquisitively wonderus (my own word).  This Fall Michael, Crystal and I are going to Oregon and California, following the coast all the way down.  I am very attracted to water, being a Cancer, so this should be a fabulous trip.
at September 23, 2011 No comments: Links to this post 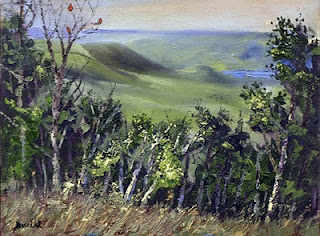 I discovered this 10 x 12 plein air oil painting in a closet in my studio just now.  It was painted a few years ago down in Eastend and portrays the view from a hill overlooking Don's ranch, where we all stay when we are down there for our annual retreat on the July weekend.  I had a call from my painting buddy Dean Bauche early last week inviting me to go down there and do some encaustic painting with him.  Would have been nice but I had to be in attendance for our Art of Import Show and also in Regina for my wife. (she needed a chauffeur).  The good thing is I got to see a wonderful exhibit of the Regina Five Painters, I was particularly taken with Art MacKays work.  Canada's painters are severly under rated and should be getting alot more attention on the world stage.  Funny thing happened when I walked into the Gallery, Danny Bauche yelled, "hey, I know that guy!"  So we had a nice chat and I ended up spending time with Deans daughter instead of him.  Funny how life is.
at September 21, 2011 No comments: Links to this post

The pastel painting above is another of a series of works I am doing based on my week long stay up at Denare Beach this past August.  As I might have mentioned before I used to live in the vicinity of Flin Flon and until I got back up there after an absence of 3 years I never realized how much I missed the area.  I look forward to going again soon, my friend Sarah says I have a place to stay, right Sarah?  I love water and rocks, with the odd tree thrown into the mix.
at September 19, 2011 3 comments: Links to this post

Morning on the Water

The weather has been exceptionally fine lately and I have been managing to get out on the water in my Kayak practically every day.  One fine morning I took my watercolour kit with me and painted this piece above.  Actually it was such a fine morning that I skipped going to work, a person can do that when you are self employed!  Just have to work twice as hard in the afternoon.
at September 11, 2011 No comments: Links to this post

The Burden of Leadership

The painting above is an encaustic and oil on a masonite panel.  I painted it while at our Retreat in Denare Beach in August of this year.  Looking at it now I decided to title it as above because it struck me that this man, sitting on his throne of horns, has a lot to think about. Canada just recently lost a potentially great leader in Jack Layton, a man I admired from the moment I became aware of him.  It is my opinion that great leaders hold their constituents before them and put their personal desires behind, in favor of serving their country first and foremost.  I honestly don't see that in Canada right now and I think I am old enough now to know the difference. A writing by Lao Tzu comes to mind:


It is better not to make merit a matter of reward
Lest people conspire and contend,
Not to pile up rich belongings
Lest they rob,
Not to excite by display
Lest they covet.
A sound leader's aim
Is to open people's hearts,
Fill their stomachs,
Calm their wills,
Brace their bones
And so clarify their thoughts and cleanse their needs
That no cunning meddler could touch them:
Without being forced, without strain or constrain,
Good government comes of itself.
at September 06, 2011 No comments: Links to this post 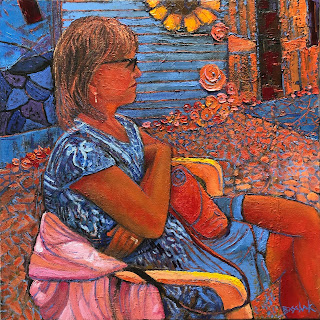