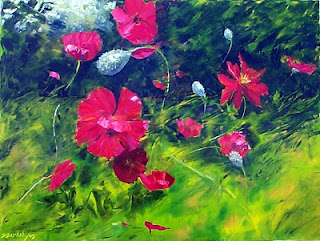 Rememberance Day will soon be upon us in Canada. My Dad tried to serve but he was too young so they sent him packing back home. Good thing because all his brothers were already in the army and someone had to look after Mother and the farm. After listening to Stewart Macleans Vinyl Cafe this past Saturday I was reminded of an amazing experience Crystal, Michael and I had in Winnipeg a number of years ago. You see, Stewarts story was about a Canadian bag piper who went to the Memorial at Vimy Ridge to play his pipes in honour of his parents. We were in Winnipeg's old hockey arena to take part in a Tattoo to honour a group of Cadets who were to be presented with various awards of distinction, including my son Michael. Part of the ceremony was the playing of Amazing Grace on the bag pipes, starting with one lone piper way up in the stands with all the lights in the building off. The piece culminated with I would estimate a couple of hundred bag pipers. Tears come to my eyes as I write this because I have never been so moved in my life. I think I can understand the effect those pipes have on soldiers in the battlefield after hearing all those soldiers playing that evening. God bless our men and women who served and are currently serving our country.
at November 08, 2010